Bringing back the glorious past

Jehangir's Kitchen has been crafted to give you a taste of the glorious past. The perfect blend of satisfyingly traditional Mughal dishes with a contemporary culinary twist. The name has been inspired from the grand Mughal emperor - Jehangir. He is known to be one of the greatest rulers seen in the Mughal era and was widely renowned for having an enriching taste in food and art.

In 2016, the company wanted to launch in the World Trade Center Mall in Abu Dhabi. To stand out in a competitive market, the company had already created an identity, but they wanted something different and thus turned to Tablo Noir to rebrand it.

Keeping the element as the same we focused on the typeface to depict the essence of the brand. The typeface was also significant with that time, with a twist of merging it with the modern era.

The tagline mmm…Mughalicious was coined with delicious Mughal intentions in mind. The designs drew inspiration from traditional Mughal heritage.

The whole website was designed and developed keeping in mind the mantra behind Jehangir’s Kitchen. They required a contemporary look and feel to the ever-glorious Mughal traditions. Hence the designs were based out on classics but with a contemporary interface. Since the restaurant held online orders and delivery, it was showcased in a prominent manner. The website colours were based on the logo theme as well. The website was designed from scratch and we incorporated a WordPress backend for ease of updating the site. A CRM system helped stay connected with customers and it streamlined the process. 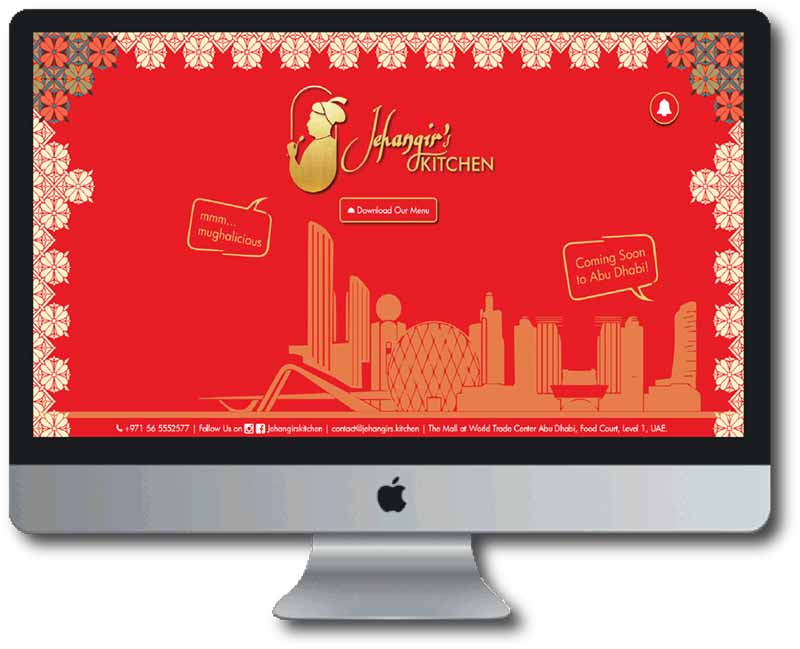 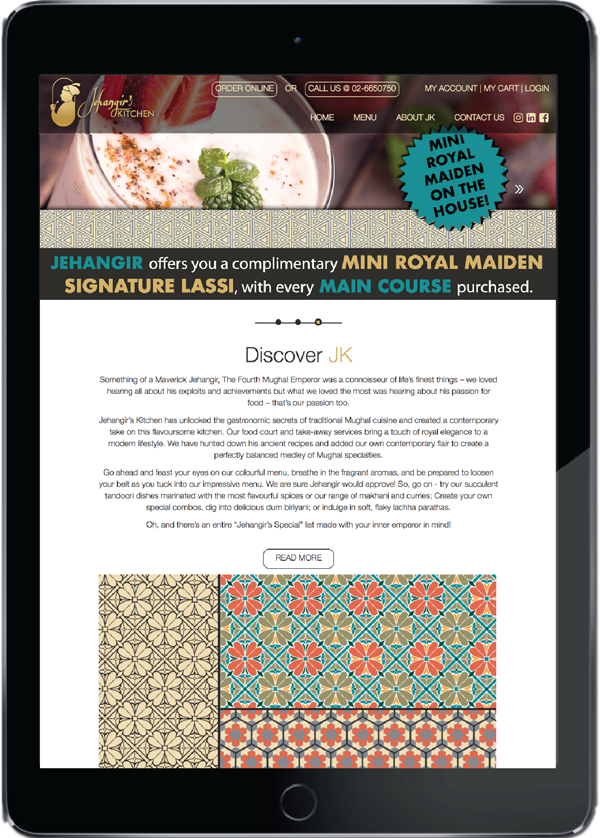 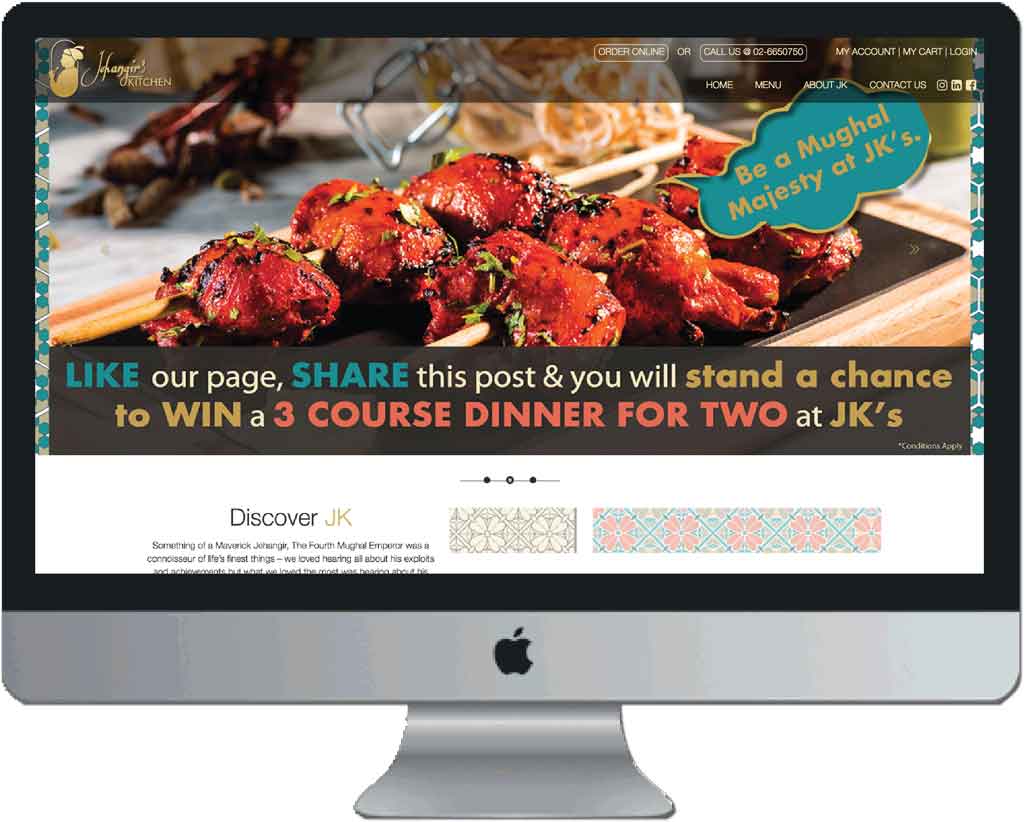 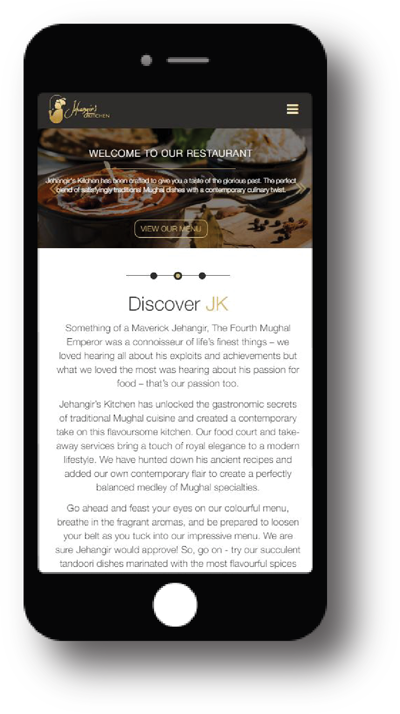 Colours and patterns of that era

Each colour scheme and pattern relates back to that time with a neoteric touch to it. Hence we brought in these patterns and styles across pillow covers, scarves, table mats, coasters, to name a few.

The branding was highly effective in curating the vivid Mughal food experience and thoughts. The design elements helped create a unique niche for itself with pure authenticity. We were able to produce a memorable brand identity with elegance. 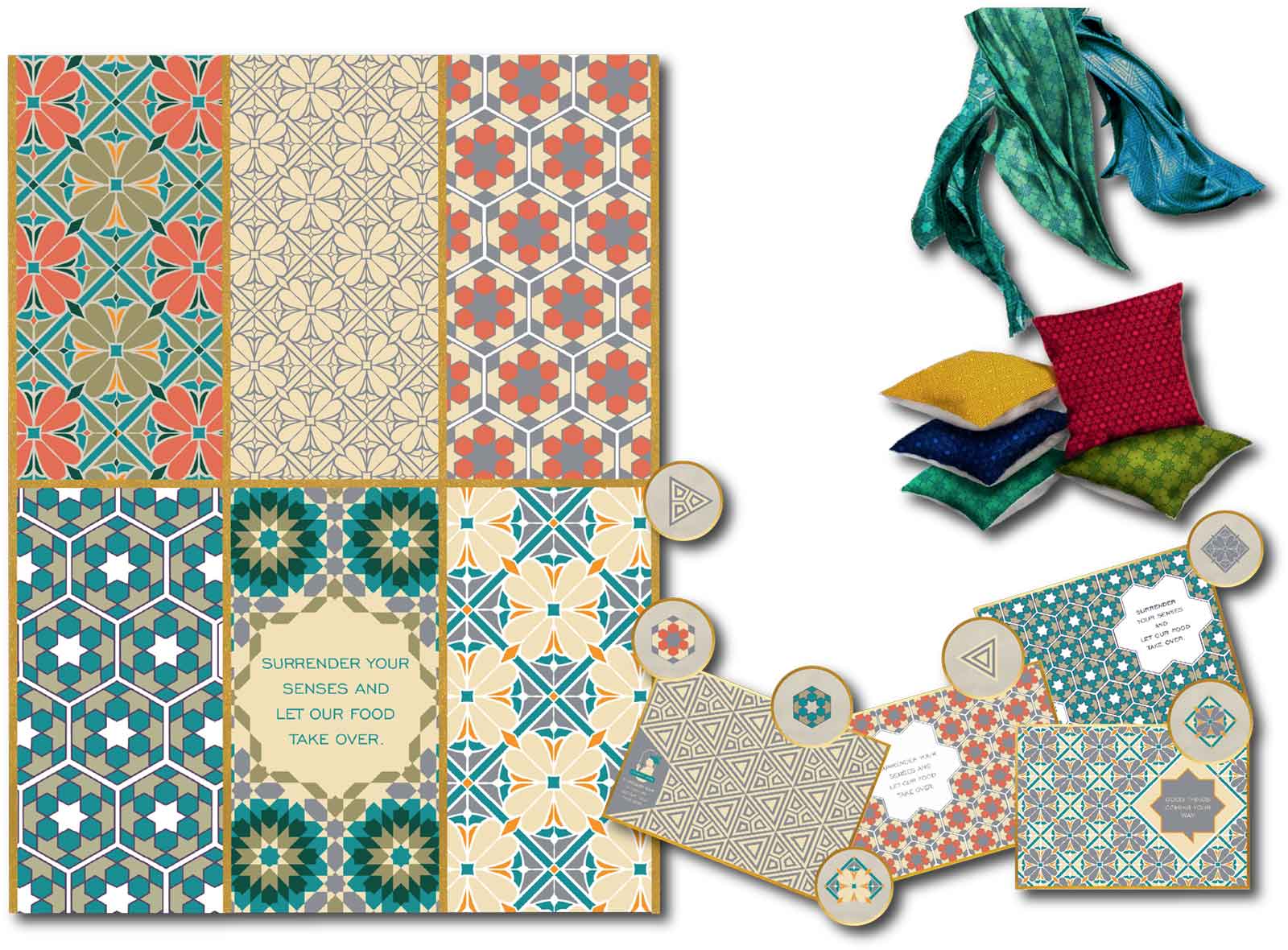 Drawing inspiration from the patterns and colours, we combined it and brought out some unique designs for the packaging of Jehangir’s kitchen. Each bag of the box or even a napkin brought out to the quirky yet regal essence of what Jehangir’s Kitchen is all about. This coupled with the catchphrases makes Jehangir’s Kitchen the place to be.

Just having all this isn’t enough, if you are unable to be there and dive into those succulent dishes, so we made changes to the existing facade. This shopfront embodies all things that remind you of that era and is mixed with the aromas and flavours of a Mughalicious heaven. The designs for the menu were also designed in such a way that they resonated with the likes of the brand. The entire branding techniques were handled keeping in mind the 5 elements essential for branding. 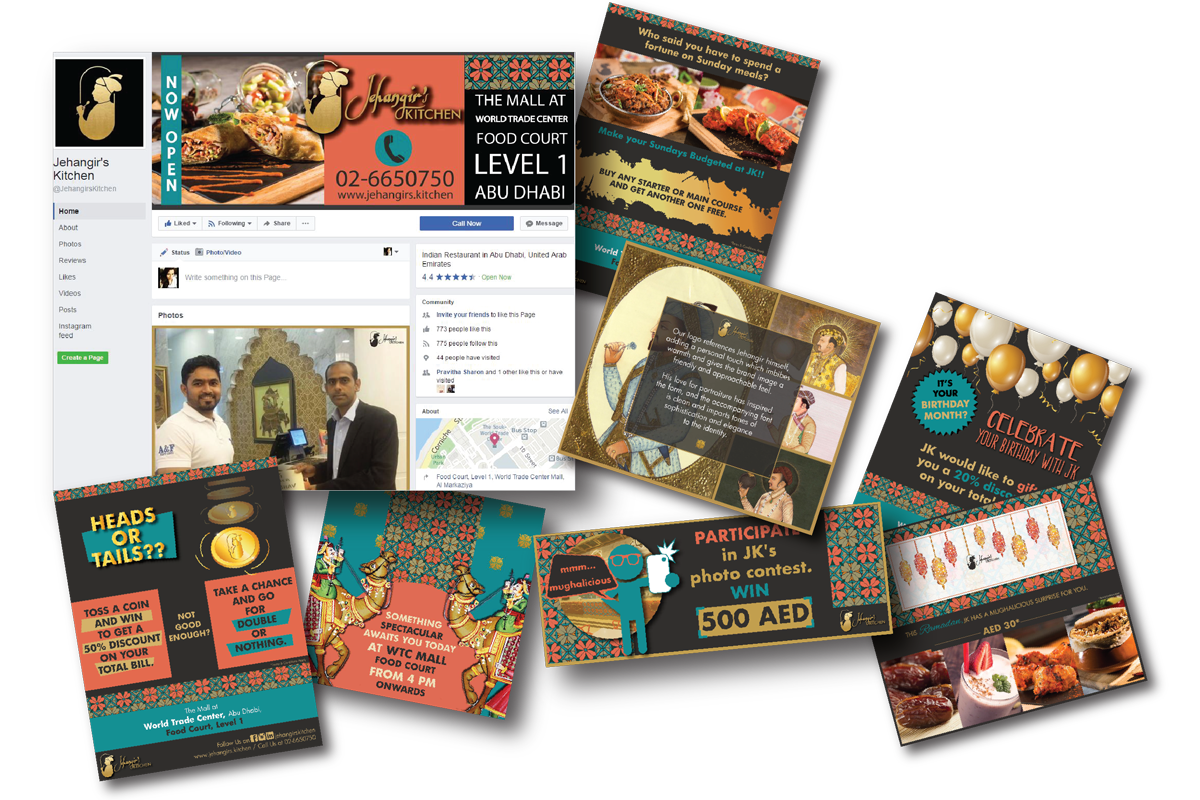 The King of Social Media

Jehangir's Kitchen struck the right chord and connected well with the audience on both Facebook and Instagram through excellent culinary design images, videos, occasional tips, seasonal greetings and engagement. The aspects of various “social media platforms and their uses” were implemented for victorious outcomes. The social media presence of Jehangir's Kitchen has all that the emperor offers and more, so stay tuned to Jehangir's Kitchen’s social accounts to receive his gifts.

The next big step towards branding was to take it to the world. We sought out the best techniques in delivering the aspects of the brand, its essence and its destination. Through link building and SEO, the brand was able to connect to its desired audience far more effectively. A good digital relationship resulted in a more loyal following. This helped increase shares and likes to the page. The tactics and approaches we used, helped build a good brand experience.

The portrayal was a treat to both the eyes and mouth. Jehangir's Kitchens’ Mughal delicacies needed to be spread to the masses, so we brought their presence out on social media. The emperor is generous and gives his subjects a lot of offers to satisfy their Mughal cravings, thus a social media strategy was built for its online promotion and marketing.

Marketing Collaterals for His Highness

We realised that there were other powerful ways of engaging Jehangir's Kitchens’ subjects and these were through various marketing collaterals. As a branding and design agency, we knew that Jehangir's Kitchen needed an ingenious as well as a professionally designed theme to play a pivotal role in communicating various business facets of Jehangir's Kitchen. We made standee and menu designs for Jehangir's Kitchen that held illustrious looks and were also contemporary in style. The idea bore an unusual format and so we experimented with trending design techniques to bring pure grace out of the designs. Other collaterals were flyers, pamphlets, in-store branding, advertisement designs to name a few, for which we went with Jehangir's Kitchens’ timeless theme as the base and made various design styling to reflect today's digital taste.

Talk to Us on the Phone

Get in Touch by Email